Last summer, Tottenham Hotspur agreed the transfer of Marcus Edwards to Portuguese side Vitória Guimarães. There was no money involved in the deal, although Spurs kept 50% of a future sale.

With four goals and four assists in 17 appearances so far, the winger has been doing great in Portugal, and that’s why he’s now seen as an example of success by his club.

Newspaper Record brings a piece today saying Edward’s transfer is now set to be used as a role model by Vitória Guimarães, as they intend to make similar deals in the future.

With the player building a big valuation in his first months at the club, there’s a chance of not only having a good result on the pitch, but of making a big profit with him as well. 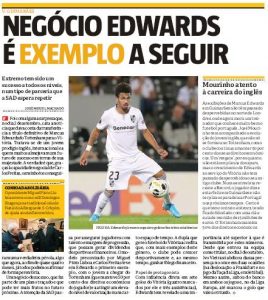 Something interesting is that Record claims José Mourinho has been following the player’s development in Portugal. It’s said that bringing him back to Tottenham isn’t in the manager’s plans yet, but there’s been some attention on what he’s been doing at Vitória.

And even if the Portuguese side sell him soon, there’s a good reason for Spurs to have an eye on that, since they’ll be talking half of the amount. When signing for Vitória, Edwards has been protected by a release clause of €15m.