The Spanish newspaper say Foyth has been on Villarreal’s radar since he was with Estudiantes in Argentina.

At that time, PSG were in a battle with Spurs to sign the defender, and Mauricio Pochettino was key in making sure Tottenham won the race.

Foyth hasn’t had the time on the pitch he’d have liked, held back by both selection and injury. That may give the La Liga club a way to agree a deal with Spurs.

AS state Jose Mourinho ‘discards’ Foyth, yet they suggest Tottenham as a club don’t feel the same.

Spurs aren’t keen on parting ways with the 22 year old on a permanent basis, which could mean they’d prefer a loan, or want a buy-back option in any full transfer. 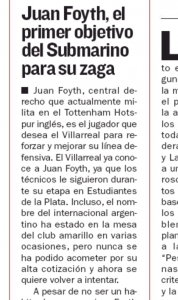 Foyth is right at the top of Villarreal’s wanted list, according to the report, and a lot is likely to depend on how the player sees his career developing.