There was a time in the last summer window when we started calling our Anderson Talisca stories ‘The Daily Talisca’, because there were simply so many rumours about the Brazilian midfielder’s future.

And it seems it won’t be much different this year, as things are heating up long before the window opens.

According to recent reports from the Turkish press, the player would be close to a Manchester United move and he’s unlikely to remain at Besiktas, where he’s on loan from Benfica until the end of the season. 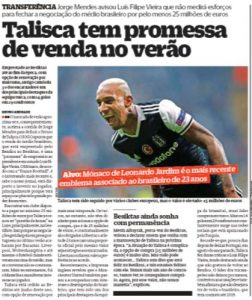 Portuguese newspaper O Jogo has a interesting story about Talisca today, saying that his agent Jorge Mendes has promised Benfica the player will be sold for over €25m in the summer.

Selling Talisca has become a ‘matter of honour’ for the agent because of the negotiations with Liverpool and Wolves which collapsed last year.

What O Jogo doesn’t seem to know is where Manchester United stand in the race. They confirm the information that AS Monaco would be keen on the player, previously published by France Football, but when covering Jose Mourinho’s interest, they don’t have anything to add.

Mourinho is a long term fan of Talisca, which has of course has helped Manchester United rumours roll along.