Home Europe From Spain: Claims grow on Friday that Jonny to Wolves could be...
SHARE

On Thursday we covered a Mundo Deportivo article about Wolves making an approach to sign Jonny Otto on a permanent transfer.

The Premier League club were said to be very pleased with the Spaniard, who is on a season long loan from Atletico Madrid, and had initiated contact for a full transfer.

Mundo said that whilst Atleti were initially against such an idea, it wasn’t ruled out if an exorbitant offer arrived, or if the rojiblancos need to raise money quickly and can’t get rid of Nikola Kalinic.

A little digging showed that the claims originally came from Spanish radio, and it had been reported as Atletico coming up with the idea rather than Wolves.

The claims continue on Friday.

Again from Spanish radio, AS go with a headline saying ‘Atletico manages the option to sell the fullback to Wolverhampton’.

Again it’s stated as being because of the difficulty getting rid of Kalinic on a permanent deal.

Marca also cover it and say they’ve been able to confirm the radio reports.

Jonny would be sold and that would provide the room to include Alvaro Morata’s wages on the accounts.

How? As well as surely bringing in a profit, the value of payments due for the purchase of Jonny from Celta, amortised over his contract, would come off Atletico’s accounts. 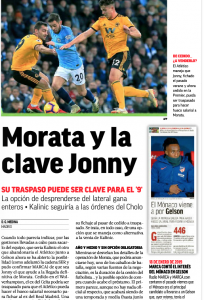 This could all move very quickly, with Atletico eager to complete the loan signing of Morata from Chelsea.

There’s no amounts been mentioned and no explanation of what Jonny himself would make of it all. The 24 year old has made it very clear on more than one occasion that he wants and expects a future at Atleti, so it may come as surprise to hear he’s being thought of in this way.

Unless this was the plan all along… and Jonny wasn’t informed.