Home Championship After joining in summer, Leeds player grades move as a 2 –...
SHARE

Pierre-Michel Lasogga has had a mixed time during his loan spell at Leeds United from Hamburg.

The striker has 7 goals and 3 assists to his name, which certainly isn’t too bad a return, but failing to score from the end of October through to mid January, albeit at least partly down to injury, put a negative spin on things for a while.

For the player himself, it’s clear he’s really happy with Leeds United life. In an interview with SportBild, Lasogga has been asked to grade his move to the Championship club.

The 26 year old answered: “I would give a 2. We had a couple of defeats in the last matches and have ended up 10th, seven points back off play-off place, 6th. We can catch up in the 16 remaining games with the new coach. In the summer I have long wondered if the step to Leeds is the right one. Now I am convinced that in my situation at the HSV in the summer I got everything right.”

A 2? Lasogga was asked to ‘grade’ his move, which would be along the lines of German school grades. Luckily, having covered Bild match ratings for years (who also use school grades), we know what these are.

1 means very good, 2 is good, 3 is average, 4 is passable but still lacking, 5 is deficient and 6 is insufficient.

SportBild asked Lasogga if there’s always a big atmosphere around him, with visitors and friends from Germany: “There is always a lot going on. My family is always there, many friends want to experience a game here. Everyone is fascinated by English football.”

The German magazine travelled to England to interview Lasogga, and saw the player’s mother Kerstin is as big a star for Leeds United fans as she was in Hamburg.

Asked who is the bigger star between the pair of them, Lasogga said: “Good question! My mother knew every box holder here after two weeks. She gets along really well with everyone here. I would say the lodge area belongs to my mother! The people here, however, generally enjoy the game. If we arrive here at 11 o’clock on the day of the match, the first ones are already waiting to get an autograph.”

There after the Cardiff City defeat, SportBild put it to Lasogga that Leeds fans are crazy, to which he replied: “We have fought, but unfortunately lost. Then the people here are still celebrating for the performance. I find that unusual.” 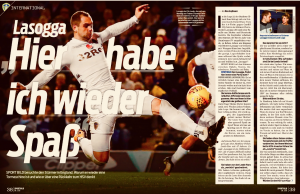 So not like Hamburg: “Unfortunately, I have never been in a similar situation, but have always experienced a relegation battle. A defeat immediately triggered survival fears.”

Asked to explain why he’s enjoying life so much at Leeds United, the striker said: “In Hamburg, I was on ice. I didn’t get a chance and probably spent most of my time watching. If you only play for five minutes, then spend several months without a goal, it nags your self-confidence. It was important for me to just have fun again, to be successful and to have an environment that is 100 percent dedicated to me. That’s the case here.”