Home Europe From Portugal: Joao Felix to Manchester City a deal building ahead of...
SHARE

Tuesday’s edition of O Jogo has a big article on the future of Darwin Nunez, a player who has been linked to multiple Premier League clubs over the past year, including Manchester City.

However, it’s not the Benfica striker who is the subject of the City mention this time.

O Jogo explain that Newcastle are ready to go big for the Uruguayan, perhaps going as high as €60m for a January transfer. The Lisbon club would prefer to wait, and keep their striker until the end of the season.

Their idea is that Atletico Madrid could then make a serious move for Darwin Nunez, but they’d need to bring in money to do so. 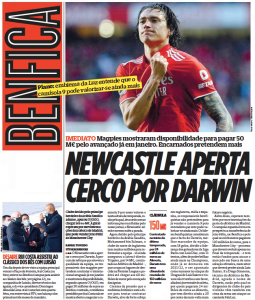 That’s where Joao Felix comes into the equation.

As far as O Jogo have it, Atletico ‘can sell’ the Portugal international to Manchester City, but that would be ‘a process that should evolve only at the end of the season’.

There’s plenty to question here, not least Atletico being shy about sending another huge chunk of money to Benfica after the Joao Felix deal, yet O Jogo clearly think there’s something going on with the 22-year-old and Pep Guardiola’s side.