Jese Rodriguez has now got all he wanted. Arriving in Las Palmas dressed like he was about to get on stage and do his reggaeton thing, Jese is the big star.

It was never supposed to happen. Just over a week ago Las Palmas president Miguel Angel Ramirez said Jese was out of their reach and was off to England: “I can pay the salary of Jese, but La Liga won’t let me because of Financial Fair Play…  in England they are willing to pay everything (in terms of salary) and also to PSG.”

As Jese was hanging around at PSG, trying to put just enough effort in to not down tools but slack off enough to convince the club he had to go at all costs, Aitor Karanka went public with his desire to sign the player for Middlesbrough: “He knows this step is really important so he has to be sure. I am trying to convince him.

“He was playing for Real Madrid last season. He’s a Champions League player, a young player with an amazing future in front of him.”

Four days ago it was reported in France that Karanka had been calling Jese ‘every day’ to convince him to sign for Middlesbrough. It was all getting a little desperate, with the player clearly not keen.

Middlesbrough should have walked away earlier, and not only because it became increasingly likely this was one they’d lose.

Jese’s temperament has been repeatedly called into question and L’Equipe report today that PSG quickly realised they’d made an error in signing him. The 23 year old hadn’t been interested in learning French, hadn’t integrated himself at the club, and wasn’t acting like he thought it was a great opportunity for him.

Both sides wanted to part ways in the January window, but as PSG tried to contact the player over the Christmas break they could not, L’Equipe say he wouldn’t answer his phone. It’s this kind of ‘unprofessional’ behaviour which the newspaper have been hinting at for some time time.

He looked a little too blinged up when arriving from Real Madrid, and everything else fell out of place quickly.

It hadn’t ended swimmingly at Real Madrid, if the Spanish press are to be believed. In July of last year AS reported Madrid weren’t too content with Jese launching a music career. He released a remix of a song called Yo sabía (I know), and AS stated the player was determined to ‘fight for his dream of being a star of reggaeton’.

It was the accompanying video which rocked the boat, with Marca worrying about it being ‘sexually charged’ and flaunting a luxury lifestyle.

Less than a month later he was out. Yet waltzing into PSG acting the star didn’t quite fit with being a fringe player, even if it was a fringe player at Real Madrid.

Jese has insinuated he’s given up a chunk of his wages to sign for Las Palmas on loan, and that helped the deal go through, but simply he wasn’t prepared to give up the ‘starry’ attitude.

Signing for Middlesbrough for Jese was the Spanish equivalent of ‘a bit meh’. He wouldn’t have waltzed in as a hero, that status would have to be earned and Jese wasn’t up for it. That’s no slight on the player, he has to make the right decisions for himself, but Karanka probably should have known better.

‘Jesemania’ and a footballer who loves being a star

Karanka last worked with Jese in 2013, when the player was frustrated at his lack of chances, or any chances at all really, with Real Madrid’s first team. The then 20 year hadn’t scored his first goal for Madrid, which was understandable given he couldn’t get on the pitch, and Jose Mourinho and his coaching team were under pressure for not using him. 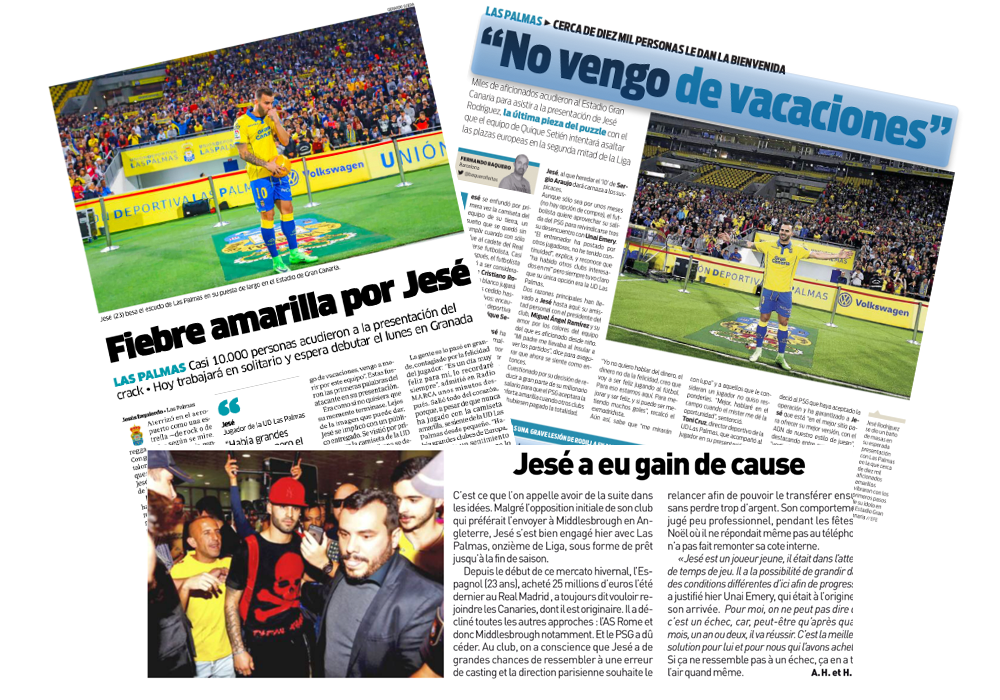 A lot has changed since then, Jese changed. He started getting in the team, his profile saw a big rise, and he clearly loved the fame side of being a footballer.

Las Palmas is perfect for the footballer and the man. He waltzed through the airport, was immediately greeted as a ‘returning’ (he’s from Las Palmas but never actually played for them) hero.

Jese is a big fish in a small Canary Island pond. The boy from Gran Canaria is currently back home, the biggest name on the island right now, enjoying temperatures Middlesbrough would grasp in mid July. Marca say there’s ‘Jesemania’ in Las Palmas, and the player himself says he’s ready to ‘die’ for the club.

It wouldn’t have worked, and if Karanka’s press conference strop this week was partly over Jese Rodriguez then he’s wrong. Jese and Las Palmas could be the perfect fit but, right now, for both Middlesbrough and the player, Karanka not getting his man looks like a bullet dodged.