Monday’s edition of A Bola has a big feature on Lisandro Lopez and Gabigol. The gist is that both are very much set up for a January transfer, and it’s down to their agents to find new destinations before the winter window opens.

Benfica have decided they can do without either, and are now keen to push the players out of the squad, at least according to A Bola. This is where Newcastle United come in, at least for Lopez, and it’s once again stated that Lopez has been edged towards England, ‘especially to Newcastle’.

There have been many claims of Newcastle interest, talks, and even offers for the central defender, but Sport Witness recently did some digging which pretty much pushed all that to one side. 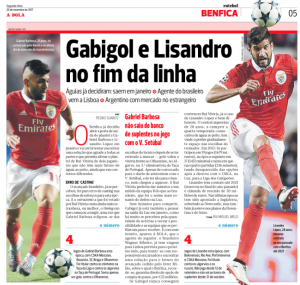 Speaking to Sport Witness, the 28 year old’s agent Gustavo Goni said: “The truth is that about Newcastle we didn’t not know anything. At least nobody talked to us, but yes, there are several interested.”

There is interest from English clubs, Goni confirmed to us, but the names of the clubs weren’t revealed. It’s fair to say A Bola don’t know the clubs either, hence why they’re still throwing Newcastle United in there.

Maybe Gabigol would be more exciting for Newcastle?