If you tuned in for the Carabao Cup version of the North London Derby in midweek, you will have noticed that Mesut Özil was nowhere to be seen on the Arsenal teamsheet.

As you might have guessed already, this has since been picked up in Italy, yet there’s a sense of acceptance from the off this would be a difficult move to sort out.

Corriere dello Sport are the ones running it, and the first thing they make clear is Inter can’t afford a full transfer in January. 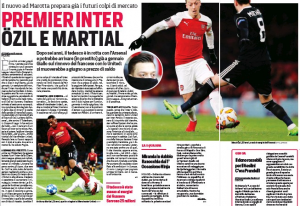 This, for FFP reasons, leaves them but one choice: a loan.

The Italian newspaper believe the Gunners would be looking for £25m should he be sold next month, but Inter will only sort out a loan with a view to buy at the end of the season should they make the first move and approach the Premier League side with an offer.

Honestly, this sounds like a lot of nothing at the minute, and there’s no real concrete information in Corriere’s update to suggest Beppe Marotta would be willing to come forward other than the fact it’s Mesut Özil and it would be a good look for Inter.