Portuguese newspaper A Bola has today some bad news for Everton, in case they’re still interested in Sporting midfielder Wendel.

The Toffees, along with Fiorentina and Nice, were the clubs who contacted the agents of the 22-year-old back in the winter market.

A Bola says Sporting were demanding only €20m for the player back then, but given the good form he had this year, his price has risen.

Wendel was responsible for taking Bruno Fernandes’ role in the team. And considering his importance these days, he won’t leave the Lions for less than €35m. 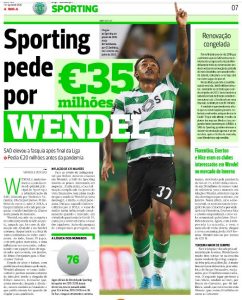 A Bola doesn’t seem to know if Everton are still interested in the signing, since there are no claims of new contacts for the transfer. But in case they are, they’ll probably regret not finding a deal for the Brazilian back then.

Wendel has a contract with Sporting running until 2023, and is protected by a release clause of €60m. So the Lions are comfortable to demand whatever they want this summer.