Home Europe Jan Siewert on ‘goosebumps’ moment at Huddersfield Town, and whether ‘Dave’ is...
SHARE

Huddersfield Town manager Jan Siewert has been speaking to Kicker about his time at the club so far, after being appointed manager following the exit of David Wagner.

The Terriers are currently glued to the bottom of the Premier League, not only are they 14 points away from Cardiff City and safety, but also six points away from Fulham, the club above them.

Siewert has told the German football magazine that he hasn’t given up hope of avoiding relegation to the Championship, and has seen some signs recently to suggest survival, however unlikely it currently seems, is actually possible.

Speaking to Kicker, the former BVB youth coach said: “Among other things, from the game against Arsenal, even if it was lost 1: 2. The game has shown me that the team believes in our new style of play. The club rose like a phoenix from the ashes when it came to the Premier League. Everyone here is aware of this fact and can assess the situation realistically. But as long as mathematically there’s enough points left, we will fight for it. And the fans are behind us, they let us feel that after the Arsenal game. That was a goosebumps moment. We would like to connect to that.”

Having the fans onside will be huge for Siewert’s success at Huddersfield or otherwise and so far they’ve certainly shown patience and some trust in the longer term process.

As a clear copy of the Wagner plan, it will be hoped that if relegation does happen, the chances of promotion will be good. 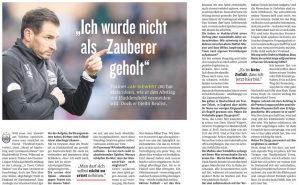 Kicker asked Siewert how present the former manager is at the club these days, likely in terms of advice or simply hanging over like a shadow.

The new boss answered: “What Dave has done here will forever be linked to the club’s history. We were on the phone when I started here. In the conversation he told me what he experienced and how everything is here. That was extremely important to me.”