Considering Simon Mignolet isn’t playing for Liverpool these days, he’s been spending a lot of time talking to the Belgian press about his Anfield situation.

Benched by Jürgen Klopp, who has preferred to use Loris Karius for the majority of the season, the Belgian goalkeeper has been rather vocal, giving a spate of interviews, without actually complaining too much.

Asked what his relationship with the German manager was like by Sport/Foot in Belgium, he said: “We’ve spoken about it. I’ve often told him I’m not satisfied about my current situation. The big difference compared to last year is that I’m not in goal. It doesn’t change our personal relationship, but it affects the professional one.

“I don’t moan about it, because I don’t think it’ll change anything. Sometimes, I get told I’m too nice, but I try and think: what advantage can I get from my behaviour?” 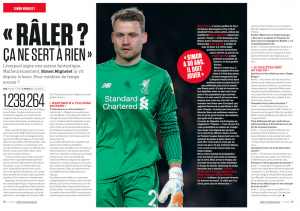 Clearly a bit annoyed at the lack of game time, especially at this stage of his career, the 30-year-old has yet to seek a transfer away from Merseyside, although that might very well change this summer.

Asked about a possible exit in the summer, he said: “I haven’t thought about it yet. It’s also not my job. Other people are there to deal with that. I still have three years left on my deal. I therefore cannot be the sole decider. A lot depends on the club’s will.”

First and foremost, however, his main goal is to be ready for the World Cup, which Roberto Martinez has already all but confirmed he will be going to, hence why he stayed in January.

He continued: “The transfer of a goalkeeper is difficult in the winter. We were still in the Champions League, there’s the World Cup… I need to focus my energy on training every day. To be ready, at any moment, because you never know what might happen.”

With rumours Liverpool are on the lookout for another goalkeeper this summer, with links with Roma’s Alisson, for example, these could be Mignolet’s last few months at Anfield.

If he does go, it will be very interesting to see who comes knocking.

Newcastle in contention to sign Bundesliga man – ‘Interesting offer’ would...