Ilkay Gundogan was part of the Premier League Team of the Season as Manchester City waltzed their way to another title this year.

His contribution to Pep Guardiola’s side is not overlooked by most. The former Borussia Dortmund player may not get the plaudits of Kevin De Bruyne, but then few do, indeed few ever have.

Ahead of City’s Champions League match against PSG this week, Gundogan spoke to L’Equipe, and one of the questions put to him was something Mikel Arteta had previously said about the player.

Currently manager at Arsenal, Arteta worked with the midfielder at Manchester City, and, after Gundogan had insisted personal statistics and achievements mean little to him L’Equipe put the following across: ‘Your words recall what Mikel Arteta used to say about you: “Maybe he doesn’t shine, but he allows others to shine.”‘ 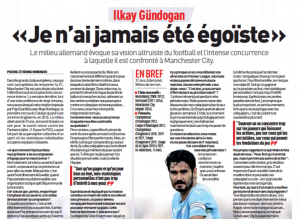 To that, Gundogan, clearly happy with the words of the Arsenal manager, responded: “I really like this quote, I often use it to describe my game. It’s important to have a clear idea of how you can help your teammates or not. I have never been selfish and never will be.”

L’Equipe then asked the player if he feels there’s sometimes too much focus on those who get the best figures for goals and assists, and the Manchester City man agreed: “Often we focus too much on the players who finish the actions, not on those who initiated them, on those who lay the foundations of the game.”