Here we are, one day away from Inter’s deadline to avoid further sanctions from FFP, needing to make €30m, and the stance regarding Ivan Perisic’s transfer to Manchester United remains the same: €50m or nothing.

A potential move to Old Trafford for the Croatian forward has been one of the stories of the summer, kicking off big time when José Mourinho was spotted in Croatia, where he was said to be meeting the player’s agent.

However, before we delve into the actual Perisic situation, Gazzetta on Thursday have been kind enough to publish a little FFP guide to help everyone get their head around the situation.

The only guaranteed Inter sale right now is that of Ever Banega to Sevilla, which should bring Inter €9m.

After that, it gets a little bit confusing, but this is how we view it.

Inter want to sign Milan Skriniar from Sampdoria, which is likely going to cost them around €25m.

The plan here is to for Inter Milan to buy him by including Gianluca Caprari in the deal, who is valued around €12-13m.

What is likely to happen here is that Inter will mark Skriniar down as a €25m purchase for the 2017/18 season and the inclusion of Caprari will go down as a €13m sale for the 2016/17 season, with Inter not actually making any money, but on paper it shows they’ve gained €13m towards FFP. 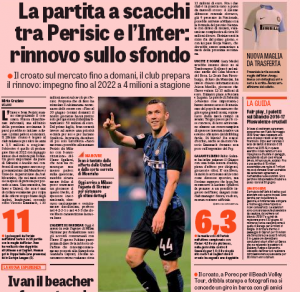 This would then mean they need to make around €8m by Friday, with Genoa said to be interested in Jonathan Biabiany, Andrea Ranocchia and George Puscas, meaning one or two of those deals would see Inter over the line safe and sound.

Talk of a sponsorship of around €20m has gone rather quiet, and Gazzetta make it clear Inter’s best chance of meeting the demands is via sales.

Now, back to Ivan Perisic.

As mentioned above, Gazzetta explain the situation remains the same, with Manchester United needing to spend €50m by Friday or no sale.

After that, he isn’t on the market anymore and Luciano Spalletti will get to use him, even if the player would prefer the move to Old Trafford.

The only way a sale would then take place is if Inter receive an offer that blows them away, meaning well beyond €50m.

The Serie A side have already taken a few baby steps towards this plan, with Gazzetta reporting ‘informal talks’ about a new deal to keep him at the club until 2022, meaning a two-year extension on his current deal.

That’s where we stand at the moment, folks.

It all rests on whether or not Inter can get their sales done by tomorrow night.

If they can’t, Ed Woodward’s offer of somewhere between €30-40m is on the table, ready to be accepted.