Liverpool addressed their defensive woes by adding Ben Davies and Ozan Kabak to their squad on deadline day of the winter market.

The Reds then confirmed Joel Matip will be out for the remainder of this season as he joins Virgil van Dijk and Joe Gomez in the club’s long-term absentees.

Van Dijk suffered a serious injury against Everton last October and has been sidelined since then.

In his pre-match press conference on Tuesday, Jürgen Klopp admitted the Dutchman is unlikely to feature again for the Premier League winners this campaign.

The Liverpool manager’s comments may not come as a welcome news for the Netherlands, who are hoping the centre-back can regain full fitness for the Euro 2020.

The former Crystal Palace manager explained why he hopes the centre-back makes it to the national team squad for the summer’s UEFA tournament. 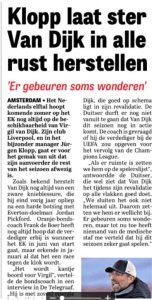 “It’s going to be close for Virgil. He is working with so much energy. If you see what he does… In my time, you were only allowed to kick in the pool,” De Boer said.

“If Virgil does not suffer a setback and if it [recovery] goes a little faster than expected, he must be able to make it to the European championship opening against Ukraine on June 13th. He’s very important to our team, on and off the pitch.”

Time should tell whether or not Van Dijk will regain full fitness to represent his country at Euro 2020.