Maxi Gomez arrived at Celta Vigo in 2017 and went on to score 30 goals and make nine assists across two seasons in La Liga.

The Uruguay international’s performances drew attention from West Ham United and they wanted to acquire his services in the ongoing transfer window.

Gomez had a €50m release clause in his Celta contract and Manuel Pellegrini’s side were ready to offer €55m to the Spanish club, which was to be paid in three instalments.

However, Celta turned it down and it provided an opportunity for Valencia to sign Gomez. As a part of the deal, Santi Mina and Jorge Sáenz moved in the opposite direction, with the latter joining them on a two-year loan deal.

Gomez has sat down for an interview with Spanish newspaper AS and was asked ‘Why did you decide for Valencia and not for West Ham?’ 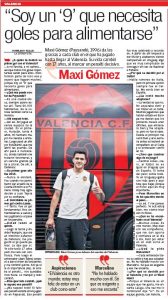 He said: “Because Valencia is a team that I like. I love La Liga. Once they showed interest in [signing] me, I said “yes”. It’s a big team, with history.”

When further questioned what he has found so special in Valencia, Gomez stressed: “Many things. It’s another world. Colleagues are very good, they give me input and confidence every day. I’m happy to be at a club like Valencia.”