Home Europe From Italy: Wolves forward could be offered to Serie A side this...
SHARE

So far, Wolverhampton Wanderers’ summer has been all about Jorge Mendes potentially bringing more of his clients to Molineux rather than seeing them leave the promoted club.

However, Corriere dello Sport on Friday believe the Portuguese super agent could offer one of his players to Lazio in the coming weeks.

That man is Diogo Jota.

This wouldn’t be the first time Lazio have relied on Mendes to help them in a deal, most recently turning to him to sign Nani on loan from Valencia last season.

With the Portuguese winger, who only played 630 minutes of first-team football, set to return to Spain, the idea is Diogo Jota could come in and take his place at the Serie A club. 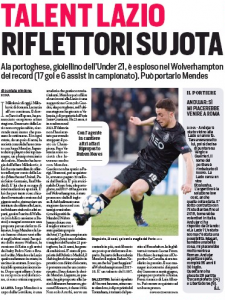 There’s also the Gonçalo Guedes option, but with Paris Saint-Germain demanding a lot of money for him to balance their FFP issues, Jota appears to be the safer bet financially.

Scoring 17 league goals and capable of playing down the left or through the middle, the 21-year-old Wolves forward could end up being the impact winger Lazio hoped Nani could be last season.

It’s still in the speculation stages, but it’s certainly one to keep an eye on in the coming weeks.

If it were to become something serious, Wolverhampton will undoubtedly be looking to make a big profit on the money they’ve spent to make Jota’s loan deal permanent.