Manchester United fans, let’s all let out a collective groan together because Matteo Darmian season is back.

The good news is that this is likely to be the last summer of it, since the Red Devils have already triggered his one-year extension and they won’t want to run the risk of him leaving on a free next year.

After all, there is a market for the Italian defender, and Inter are at the front of the queue.

Gazzetta dello Sport are the ones reporting the information on Friday, but what is most intriguing about their article is their claim Manchester United actually wanted to keep Darmian around, letting him know they were ready to offer him a new four-year contract. 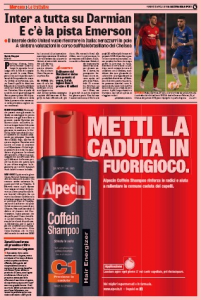 The defender, however, has ‘put the brakes’ on this, making it clear to the club this was his last season in England, wanting to return to Italy for his family’s sake.

With that in mind, Manchester United are prepared to sell him, but at a minimum of €12m.

Gazzetta believe this is well within Inter’s means, who will not be keeping Cedric Soares around, sending him back to Southampton, and will need some depth in the role.

You can breathe now.