Home Europe From Italy: How Kean to Everton came about – All because of...
SHARE

While still not officially announced, Moise Kean to Everton seems all but done.

The young Juventus forward is expected to play at Goodison Park in the upcoming campaign, where he will undoubtedly get more first-team football than if he’d stayed in Turin.

Gazzetta dello Sport have a big article on it all on Wednesday as the announcement draws nearer, with a few details interspersed. 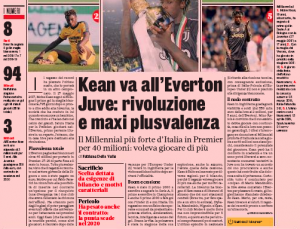 However, the most fascinating piece of information in the entire article is how the negotiations for the Italy international first came about.

Gazzetta claim that it’s actually Juventus who made the first move, calling up Everton to see if they would be interested in signing Mario Mandzukic.

Marcel Brands (who we assume was the man on the other end of the phone) replied by saying they were more interested in Kean, and asked information about him.

Talks started from that point onward, and the rest is (almost) history.