Tottenham and Inter Milan remain at an impasse for Christian Eriksen although serious progress has been made on the deal.

According to Gazzetta Dello Sport, the two clubs participated in a conference call yesterday to negotiate a deal for the Danish midfielder.

This call was seen as ‘the toughest cliff’ by the Italian side, who knew that dealing with Tottenham chairman Daniel Levy would not be easy.

That proved to be the case, with Levy rejecting Inter’s initial offer of €15m and sticking to his asking price of €20m.

However, Inter had a trick up their sleeve, and the meeting ‘presented quite a few unknowns’ according to the newspaper.

They report that Inter ‘played their cards with particular skill’ and put Levy on the spot by making it clear they had agreed on a deal for Eriksen to join on a free in the summer should an agreement not happen this month.

This has effectively took away Tottenham’s chances of creating an auction for the midfielder and put the ball firmly in Levy’s court.

He is said to have ‘played the part with the usual effectiveness’, but the situation is quickly turning against him.

With two weeks left of the transfer window, the market is firmly in Inter’s favour. If Eriksen remains at Tottenham, they will lose him on a free in the summer, and that’s something they want to avoid.

It means they have to ‘play along’ and a ‘psychological battle’ is now underway between the two parties. 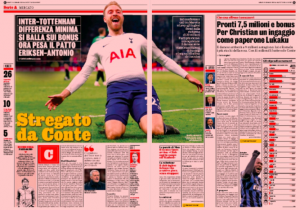 Eriksen, for his part, has made it clear he would like to join Inter Milan, who are willing to make him their highest earner alongside Romelu Lukaku on a deal worth €7.5m per year plus €1.5m in bonuses (he earns €4.5m a year at Tottenham).

Antonio Conte has also ‘bewitched’ Eriksen, who made ‘unequivocal signs’ that he wanted Eriksen as soon as possible and plans to make him a ‘leader’ of his team.

These things, coupled with Eriksen’s love of Italy, he has often holidayed there and spent time in Sardinia last year when recovering from an injury, have Inter as his first choice.

A deal cannot be completed until Levy sanctions it, though, and it is now a case of waiting to see how the Tottenham chairman responds after Inter played their hand.

Jose Mourinho said on Saturday that there’s been no actual offer, so if the Italian claims are true then all this is being done verbally.