We don’t normally see Sheffield United getting mentions in the Italian press, but they’re named in several local outlets today.

The reason for it is Palermo’s alleged interest in Billy Sharp, which is detailed by newspaper Corriere Dello Sport and covered by a few websites.

Corriere brought an article saying it should be an interesting January window for Palermo, as with the new English investors, the club could explore a different market.

The outlet says this Sharp ‘rumour’ has ‘circulated’ the club, although they don’t make it clear where it came from or how real it is. 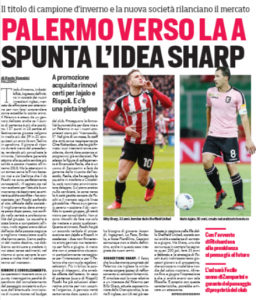 But they make it clear that Rino Foschi, the club’s football director, wants young players with potential. That would not be the case of Sharp, who turns 33 next month.

They expect the club to keep this ‘philosophy’ at least until June, which would make the striker’s arrival unlikely in the January window.

Sharp has 14 goals in 23 matches for the Blades this season, with his contract set to expire in the summer.