With Everton finally completing the permanent signing of Andre Gomes yesterday, their attention now turns to their other problems.

Kurt Zouma is a known target, and it remains to be seen if Marcel Brands can tempt Chelsea into a permanent sale.

After that, finding a new striker, or someone who can play across the front three is a priority. As of yet, there have been few rumours surrounding such a player, but Moise Kean is a name that keeps popping up.

The Italian youngster burst onto the scene this year with a series of impressive performances for Juventus and looked set for a bright future at the club.

However, a recent incident with Italy’s under 21s, and his lack of desire to sign a new contract has left the Serie A champions considering their options.

Earlier today we covered Gazzetta Dello Sport’s take on the situation, with them stating that it’s up to Kean, and that Everton are ‘leading the chase’ for his signature. There is, however, other Premier League interest and Ajax are another potential suitor. The latter option could be as part of a move for Matthijs de Ligt.

Anyway, Tuttosport have followed that up and reaffirmed Everton’s interest. They say that 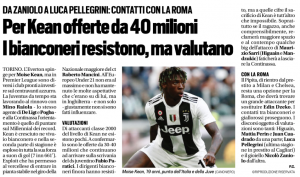 Everton are ‘pushing hard’ to get Kean this summer. They also say that bids of €30m to €40m have already arrived, although they don’t expressly state it is Everton who have offered those figures.

The insinuation is very much that the Toffees have made an offer, but it’s not expressed explicitly.

So far Juventus have resisted a sale, but those kinds of figures could be tempting to them. And as far as Corriere della Sera are concerned, selling Kean is a real possibility this summer.

They say Juventus are ready to let Kean go but want to make a big profit on any sale, although, they want to ensure a there is a buyback option in any deal as they don’t want him to be off their radar altogether. 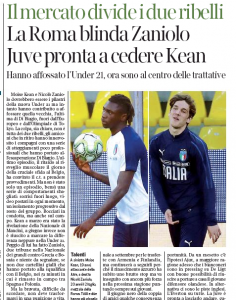 That’s undoubtedly a wage Everton could afford, while the price tag could also be in reach. Indeed, they’ve shown a willingness to spend big money on young talent if they’re confident the player can develop. Kean would undoubtedly fall into that bracket given he’s currently one of the highest rated youngsters in world football.

Whether he’d be interested in a move to Goodison Park, though, is debatable. He’d be guaranteed first-team football on Merseyside undoubtedly, and the Premier League would be good for his development, but they can’t offer him European football at present.

Having said that, Everton have proven themselves to be a club good at developing young talent, like they did with Romelu Lukaku and more recently Richarlison, and that may tempt Kean more than anything.

The club’s good contacts with Raiola, even more so now Marcel Brands is in place, can’t do any harm.