Home Europe All that’s needed is to make it official – Liverpool said to...
SHARE

After many months of speculation, Corriere dello Sport have the news Liverpool fans have been dreading, and that’s that Emre Can has finally said ‘yes’ to Juventus.

The Germany international, whose current deal with the Reds expires in the summer, will now leave Anfield at the end of June to team up with his compatriot Sami Khedira over in Turin.

After missing out on Pietro Pellegri, who went to Monaco, this represents a needed victory for Juventus in the transfer market, and a free one to boot.

Having to wait until February to announce any free transfers, such as the one that would take Can to Italy, Corriere believe all that’s needed now is for Juventus to make it official, having seen off interest from Manchester United, Manchester City, Bayern Munich and Real Madrid. 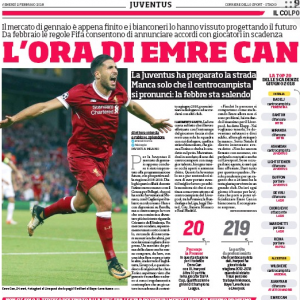 It all sounds well and good, yet the article doesn’t offer much detail, and is mostly based on assumptions that the Serie A champions have done the work needed to get it sorted.

To be honest, if Emre Can really wanted to sign for Liverpool, he would have done so by now, and, unlike Mesut Özil, there’s enough certainty coming out of Italy he’ll be a Juventus player next season that it’s hard not to believe them.

However, stranger things have happened in football, and he could easily have a change of heart if Liverpool’s form stop see-sawing.