Over the weekend, a few reports emerged claiming that an Arsenal scout had been present for Roma vs Inter in Italy, a match which ended 2-2.

Following near constant articles stating the Gunners are interested in Cengiz Ünder, it wasn’t hard for outlets to put two and two together, meaning the Turkish forward continues to be of interest to Unai Emery and his scouting team.

However, Il Messaggero believe another player on the pitch will have caught the eye of the Arsenal envoy, and that’s Nicolo Zaniolo.

The 19-year-old attacking midfielder made his fourth start of the season under Eusebio di Francesco, previously starting against Real Madrid (twice) in the Champions League and away to Fiorentina, and the Italian newspaper feel it would have been ‘difficult’ for the Gunners’ scout ‘not to notice’ the youngster’s display. 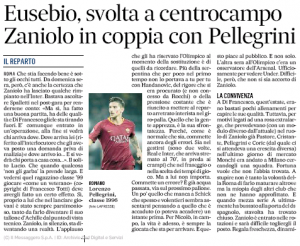 Featuring for 77 minutes, his calmness on the ball has been praised, as has the fact he can quickly forget a mistake, move on and focus on the next play almost immediately.

Contracted to the club until 2023, we doubt he’ll leave anytime soon, but if he carries on like he has done, it won’t be long before a queue of big clubs will be at his door.

It seems Eusebio di Francesco trusts him, and for good reason.