Mario Balotelli, who is not part of Jurgen Klopp’s plans for the season, is attracting a lot of interest from Italy lately. Now the latest side who have reportedly joined the race race is Udinese.

Il Gazzettino says the striker is a suggestion made at the club in the past few hours and they are now thinking about it. 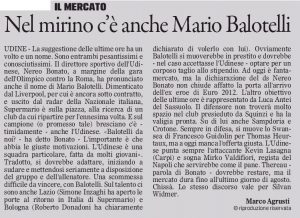 “Balotelli with us? The important thing is to have the right motivation. Udinese are a particular team, made by many youngsters,” said Nereo Bonato, Udinese’s sporting director, during the game against Roma last Saturday.

They say that by that, Bonato means he will have to adapt, fight for his place and be at the disposal of the group and the manager.

The newspaper claims that Lazio and Bologna are also interested, but if Balotelli accepts to join Udinese, he’d have to accept a big pay cut.