With reports in England circulating that Edin Dzeko’s potential Chelsea contract could ‘anger’ some of the ageing contingent at Stamford Bridge, Corriere dello Sport’s latest report on the matter isn’t going to allay their fears.

The London Evening Standard reported the Bosnian’s camp suggested £118k/week if he were to sign until 2020, or £84k/ week if the contract lasted until 2021.

However, Corriere go all out stating Chelsea’s offer is £7m/year (or just under £135k/week) until 2021, as the Blues try and convince Dzeko moving to London is a good idea. 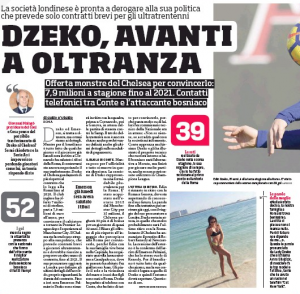 With his agent in London on Wednesday, the transfer should be completed very soon, with the fee expected to be around €34m (or €30m + €4m in bonuses).

A lot of this is down to Conte, who ‘did everything’ to get the Bosnian to London, wanting him as the alternative for Alvaro Morata, pushing Michy Batshuayi down the pecking order.

He will be joined at Stamford Bridge by his current teammate Emerson Palmieri, whose transfer equates to around €25m.