It may only be the end of November, but before you know it, the January transfer window will be upon us.

And a month before any clubs can do business, the rumour mill has started squeaking and turning, ready to churn out Premier League rumours by the hundreds by the time January 1st rolls around.

Everton are one of the clubs that some are predicting will be busy after a disappointing start to the season, and improving their defence could be a priority.

However, the Italian media seem to have gotten their wires crossed slightly because, while it’s well established that Everton need/want another centre back, they’re trying to sell them a left-back.

Earlier today we covered a report from Corriere Dello Sport that stated Ricardo Rodríguez was on his way out of AC Milan having fallen out of favour.

He’s got an agreement with the club to leave in the January transfer window, and the newspaper stated Everton are a club ‘to keep an eye on’ in that regard.

That was backed by several websites, and also Tuttosport, who confirm Rodríguez can leave Milan if there are concrete offers and namecheck Everton as one of the potential suitors.

It’s not the first time the Blues have been linked, with it stated back in October and September that they were interested as well.

The rumour, though, makes little sense. Everton have Lucas Digne at left-back, and there’s certainly no desire to sell. 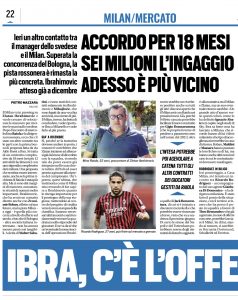 They also have Leighton Baines as his deputy and while he is getting on at this point, finding a replacement is not a pressing issue given their needs elsewhere.

Then there’s Rodríguez. He’s leaving Milan because he doesn’t want to sit on the bench and is hardly going to move to Goodison Park for the same role.

There is something in it as the rumour is all over Italy, but this may be a case of the Italian media looking up old links and reusing them for these stories.