Leaving Liverpool under controversial circumstances this summer, Bobby Duncan, seeing his path to the first-team at Anfield blocked by Roberto Firmino and Divock Origi, decided a move abroad was best for him, and Fiorentina jumped at the chance of acquiring Steven Gerrard’s cousin.

Since then, he has been trying to settle in to his new environment as best he can, playing for the Serie A side’s youth teams and scoring three goals in his first three games.

He hasn’t been able to fully escape Liverpool and some their fans on social media, who seem to take pleasure in him yet to feature for Fiorentina’s first-team, but it’s safe to say the Italian press have already taken to him.

La Nazione cover what happened over the summer behind the scenes, and state ‘the ideas were clear from the start’ and ‘if there was place he wanted to continue his growth away at away from Merseyside, it was Florence’.

They describe it as a ‘brave choice’, especially when you take into account the teams he played at before, who certain members of his family are and the 30% pay cut he has taken to go there.

When Fiorentina approached him, the ‘yes’ was ‘immediate’, and the ‘hardest barrier to overcome’ was Liverpool themselves, who wanted €5m for him in April.

However, at the August, they decided to ‘capitulate’ and accept €250k, thanks to work from Professor Vergine, intermediary Vincenzo Morabito and his agent, Saif Rubie. 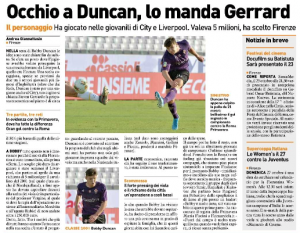 They state that ‘among the reasons that helped the attacker in his choice the most was the project’, where he looked at the recent past, convinced he had more of a chance of making the first-team there, as they aren’t scared to bring youngsters through, and have nursed many current internationals in their youth.

La Nazione state the ‘economic part was irrelevant’, to the point when ‘Bobby visited the house that was supposed to host him, he decided to rent a more expensive one instead and accommodated the host family, who now live with him and he bears all the costs’.

He has already ‘blossomed with his new companions, who are slowly helping him learn Italian’.

It seems things are going well for the youngster, and perhaps this is exactly what he needed to make a step up in his career, even if it might take him a few months to convince Vincenzo Montella to give him a chance.

At least, he’s on the right path now.