The attacker returned from international duty with a knee problem, and the Manchester United boss has said his player could be out for the rest of the season, potentially missing Euro 2020.

Solskjaer also made his frustration clear over the situation, especially after France’s medical team had suggested the injury was only minor.

L’Equipe state it’s ‘as if he criticised the medical staff of the France team’, after they thought the issue wasn’t serious.

Initial reports after an MRI scan only showed fluid on the knee, with no concern surgery would be needed. Then when Martial returned to Manchester he had another MRI scan, and that result showed a ‘partial lesion of the posterior cruciate ligament of the left knee’. 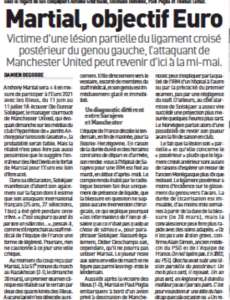 The difference in diagnosis is being put down to the difference of quality in MRI facilities between Sarajevo and Manchester, rather than the medical staff involved.

Therefore, it’s clear the French camp would be far happier for Solskjaer to send blame to Sarajevo than towards themselves.

L’Equipe believe a return ‘towards the end of April, beginning of May’ is completely possible.