A 3-0 defeat at the hands of Barcelona at the Camp Nou on Tuesday saw Manchester United crash out of this season’s Champions League.

Having started the second leg tie on a bright note, Ashley Young’s error on the left side in the 16th minute allowed Lionel Messi to cut in and strike with his left foot to put his side in front.

Four minutes later, the Argentine shot with his right foot and this time, David de Gea’s poor goalkeeping saw the La Liga winners score the second goal of the match.

Philippe Coutinho scored a stunner from outside the box in the second half to make sure his side were in a comfortable position to qualify for the semi-finals.

Mundo Deportivo and Sport have provided player ratings to both teams and we focus on United in this article.

Despite his error that led to Barca’s second goal, De Gea made a couple of crucial saves, which is why Mundo have given him two stars.

The rest of the players were given a single star rating.

Mundo Deportivo have gone through each Manchester United player and summer up their performance in one word.

De Gea: ‘Childish’ – For his error in allowing Messi to score the second goal of the match.

Jones: ‘Proud’ – Even though he does not possess quality like Rio Ferdinand or Nemanja Vidic, Mundo believe the English defender is one of the few who has impressed from this current squad.

Young: ‘Generous’ – Mundo claim he was kind, but not for United. That should just sum up what they have to say about Young. 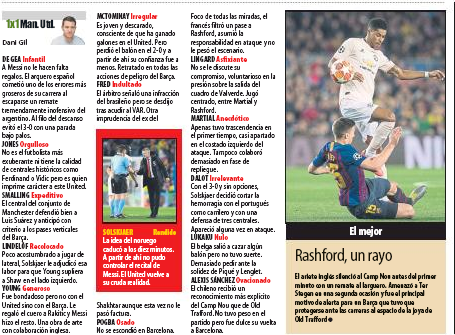 McTominay: ‘Irregular’ – This is what Mundo had to say regarding the midfielder: ‘He is young and brash… But he lost the ball in the 2-0 and from there his confidence was less.’

Rashford: ‘A bolt of lightning’ – Mundo says, ‘…silenced the Camp Nou before the first minute with a shot to the crossbar. Threatened Ter Stegen on a second occasion and was the main reason of alert to a club that had to protect themselves…’ 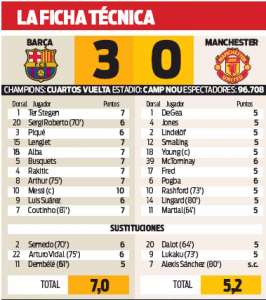 Pogba: ‘Daring’ – The France international did not hide at the Camp Nou. Made several key passes and took responsibility in the attack.

Sport have given Pogba and McTominay a rating of 6/10 while the rest of them got 5/10.