Eden Hazard is perhaps going through one of the most difficult periods in his career since leaving Chelsea for Real Madrid.

The Belgian star has been hampered by fitness issues since pushing for a move away from Stamford Bridge for his dream transfer to Los Blancos. Yet now he’s fully fit and Carlo Ancelotti is preferring other options ahead of Hazard.

Mundo Deportivo have an article on the situation in their Friday edition, and they say the player has become ‘invisible’. Ancelotti preferred Lucas Vazquez in the Champions League match against Inter Milan, and it’s a situation which ‘almost nobody’ predicted.

Despite being in ‘perfect condition’, Hazard isn’t seen as a key player by his manager, and that saw him sat on the bench to watch his teammates in what Mundo says was Real Madrid’s biggest match of the season so far.

The biggest action the 30-year-old got was warming up for 35 minutes. 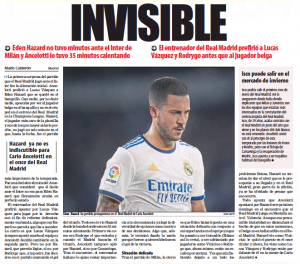 Chelsea have now moved on, and earlier claims of a potential return to the Blues have slipped away, with Thomas Tuchel’s side not having an obvious place for the club’s former superstar.