Jasper Cillessen hasn’t played a match for two months, point out AS in their Friday edition.

The Dutch goalkeeper has seven appearances so far this season, split between six in the Copa del Rey and one in the Champions League. Despite this, his intention is to stay with Barcelona, given he’s very happy with his life in the city generally.

Despite that, it’s stated Manchester City, Manchester United, AC Milan and Napoli are interested in signing him.

Let’s start with Manchester City. Pep Guardiola brought Claudio Bravo over from Barcelona and then after a season decided he wasn’t the right man. So in came Ederson and all is now happy on the goalkeeper side at the club.

Over at Manchester United they have David De Gea, and a very adequate back-up in Sergio Romero. If De Gea goes then it would be suspected a bigger name than Cillessen would be brought in to replace him, with a reasonable argument to be made that Romero is better than the Dutchman anyway. 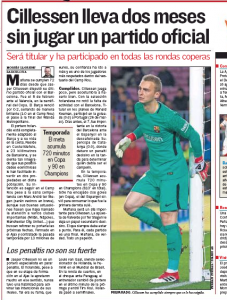 The only way a move to Manchester City or Manchester United would make any real sense is as a back-up goalkeeper, and why would Cillessen want to swap Barcelona’s bench for another where he won’t have a better chance of games?

There’s so many questions and it’s hard to fathom why City and United have been thrown into this one.