Despite being far from the most glamorous option to be presented to Paulo Dybala, Newcastle United remain one of the clubs linked with the Argentine.

After all, the money the club have at their disposal certainly makes them an attractive destination for many footballers, but it remains to be seen if that’s all the playmaker wants from his next move.

Currently under contract at Juventus, Dybala will leave the Turin side on a free at the end of the season, with the following step yet to be decided.

The 28-year-old is likely to have a lot of offers on the table, especially since an intermediary recently did a round of Spain and England to see what others had to say. 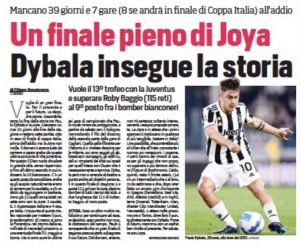 Corriere dello Sport cover this on Wednesday, claiming that Newcastle are one of the clubs the representative will have spoken to on his ‘extensive tour’.

He will now return to Italy, and is ‘expected in the next few hours in Turin’, where he will sit down with the Juventus player to discuss what he learned.

Whether Newcastle have a chance, however, isn’t said, and we’ll have to wait and see if they continue to be linked in the coming weeks.

If they don’t, then that could be the answer.