It’s fair to say that the potential arrival of Rafa Benitez at Everton has not gone down well with the Goodison Park faithful.

While not a fan of him because of his Liverpool connections and previous very negative comments about Everton, there’s simply a feeling that the Spaniard isn’t good enough for what the Toffees need.

It seems the appointment is imminent, though, with Everton’s board seemingly thinking he’s the best man for the job.

As yet, there’s been no agreement or announcement, leaving the club’s fans to hope that there may be a last-minute turn or potentially another club coming in for the manager.

Gazzetta Dello Sport offer a chance of the latter today, stating that Fiorentina are also interested in hiring Benitez.

This is something that has been reported elsewhere over the last week, and Gazzetta say that ‘intermediaries’ proposed Benitez’s name to the club.

They also made it clear that there is a ‘willingness’ from the Spanish boss to accept a contract with the club, making it even more possible. 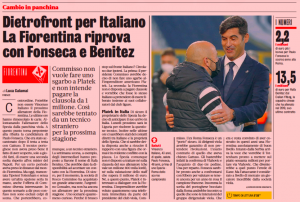 Now, all this is interesting for Everton because it hints that Benitez is not completely set on Everton and exploring his options elsewhere.

That also suggests that Everton are not 100% sold on the former Liverpool man, or at least, are yet to indicate to him that he is their chosen candidate.

It’s slim, but it’s something to hold onto for the Toffees fanbase as they hope against hope that Benitez will not be their next manager.