French newspaper L’Equipe have a feature in their Friday edition on Patrick Kluivert. It’s a rather big feature and not exactly complimentary about PSG’s director of football, with an interesting Crystal Palace story thrown in.

When Kluivert was announced in his PSG role there were questions asked. Sure, the Dutchman is a huge name in football but he hasn’t got a great record of being an assistant or a manger, and hasn’t done a similar role before.

The assumption must have been that Kluivert’s big name would help attract players, and he could form a relationship with Unai Emery similar to what the manager enjoyed with Monchi at Sevilla.

PSG’s summer transfer business hasn’t been seen as particularly impressive, and L’Equipe point out that Goncalo Guedes hadn’t exactly been a prime target, but was signed anyway in January. 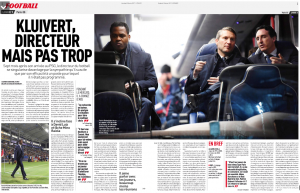 Kluivert had contacted the agent of Christian Benteke before that and asked if Crystal Palace would be willing to loan him for the rest of the season. L’Equipe insinuate this will have been somewhat naive, given that Sam Allardyce is trying to fight off relegation.

According to the French newspaper, Benteke’s agent didn’t even speak to Crystal Palace about it, or inform them about the contact. L’Equipe believe this shows that PSG aren’t the huge attraction they maybe once were, and that Kluivert has to convince potential targets, and their agents, better.

From a purely Palace perspective, it’s reassuring that Benteke’s agent wasn’t even interested enough in the PSG approach to forward it to those in charge at Selhurst Park.