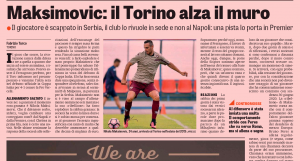 Of course, it’s not something to be laughed at when a footballer goes AWOL from his club in an effort to force a transfer, but it’s always strangely entertaining.

Nikola Maksimovic is absent without leave from his club Torino, and it’s an extreme case of doing a runner. We covered the situation over the weekend and how that may help Chelsea, but Gazzetta dello Sport have some new detail on Monday which is rather interesting.

It’s already known that Maksimovic skipped Torino training on Friday and was then spotted at Milan Malpensa airport, presumably on his way back to Serbia.

Gazzetta say he didn’t even bother giving an excuse to Torino, or even contacting the club. The defender turned his mobile telephone off and hasn’t been contacted since.

He was AWOL on Saturday and Sunday, and whilst he’s due again at Torino today, Gazzetta say the club aren’t holding out much hope. Maksimovic is set to face a very big fine.

The reason he’s so upset is because Torino are blocking a transfer to Napoli. If Maksimovic was able to force that transfer then it would be easier for the Naples club to sell Kalidou Koulibaly to Chelsea.

However, Gazzetta say Chelsea may be about to go straight for Maksimovic. The London club are ‘in the front row’ for the Serbian defender, with the situation unsurprisingly said to be ‘very tense’.

Maksimovic would certainly be cheaper than Koulibaly, and probably easier given that he’s already walked out on his club.