While the dismissal of Ole Gunnar Solskjaer could have repercussions on the pitch, there is also a chance that it has some off it.

After all, the Norwegian manager will have had some transfer ideas for January and beyond to continue improving the squad at his disposal, but all that work could now be ripped up by whoever comes in to replace him.

Another factor the next manager could affect is the future of Paul Pogba, whose contract at Old Trafford expires come the end of the season.

There’s no denying the current vitriol aimed at the Frenchman from certain members of the Manchester United fanbase due to inconsistent performances and silly red cards, but if someone comes in and gets the best out of him, things could change very quickly, such is the fickleness of football supporters.

However, there will be names, regardless of the manager who comes in, who will be high on the list of the club to replace Pogba should he leave, and one of those is likely to be Sergej Milinković-Savić.

For those who have followed Manchester United transfer windows over the past four years or so, we are deeply sorry, as this will obviously bring back bad memories, but even you can’t deny the Serbian would be an ideal replacement for the World Cup winner.

Milinković-Savić is close to being the complete midfielder, and he’s likely to be on the lookout for a new club in the summer.

His agent, former Chelsea footballer Mateja Kezman has said as much over the past few days, and it was only a matter of time before Manchester United were linked, with Corriere della Sera duly complying on Tuesday claiming the player is ‘preparing his goodbye’. 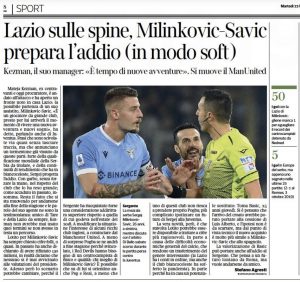 The newspaper explain that Claudio Lotito, Lazio’s president ‘has always asked for crazy figures, or almost’, stating he had ‘refused €130m’, although it’s made clear ‘no one has ever come close’ to those figures.

That being said, ‘the scenario could now change’, as the player’s stature is even bigger than it was in 2018, and ‘the interest of some wealthy English clubs, starting with Manchester United, changes the situation’.

They expect Pogba to leave at the end of the season ‘unless there are surprises’, meaning ‘the Red Devils need a midfielder of physique and quality: who better than Milinković-Savić’.

Corriere della Sera do warn ‘it’s possible that PSG and Real Madrid are also oriented towards him, unless one of those clubs manage’ to get the Manchester United midfielder.

As for the price, ‘this time Lotito could be available to negotiate at more reasonable figures’, partly ‘due to the general economic difficulties of football, which make such a transfer interesting’.

Certainly one we’ll be keeping an eye on, because of all the years, this could be the one, with Pogba’s departure as likely as it has ever been.