Even though it’s been a few years since FIFA banned third party ownership, South American clubs still find a way of keeping percentage of players who they’ve already sold.

This is the case of Gonzalo Plata, who’s been showing some good potential for Sporting and was recently linked to the likes of Leicester City and Watford.

Portuguese newspaper Record brings a story today saying the interest from Premier League sides is having a big impact on the Lions’ work to acquire 100% of him.

When signing Plata in January 2019, Sporting only paid €1m for 50% of him, leaving the other half of a future transfer for Ecuadorian side Independiente. 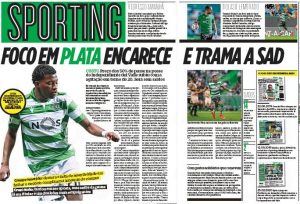 By the start of 2020, the clubs were negotiating the remaining share for a reasonable price, until Plata started doing well and was linked to English sides.

Now Independiente are being tougher in the negotiations, as confirmed by club officials in the Ecuadorian media. And Sporting are getting worried, since that could spoil their plans in case of a sale.

A week ago, the very same Record had claimed that Leicester City and Watford made approaches for the player, willing to pay only €15m for him. However, Sporting are reportedly looking to sell him for €60m.

Now if the Lisbon side really fail to acquire the other 50% of Plata, that makes it even likelier that they’ll demand a big price for him, so they can have a fair share of profit in case of a sale.