Liverpool manager Jürgen Klopp is a big fan of Kylian Mbappé and has been following the Paris Saint-Germain star since 2016.

Last month, we covered news from Spain the Reds will compete with Real Madrid for the forward.

It was also stated Klopp has a direct line with the player and the manager ‘wants to coach’ the 21-year-old at Anfield next season.

The France international’s contract lasts until 2022 and he currently earns a gross salary of of €1.9m per month.

According to Le Parisien, the former AS Monaco man ‘would not lose’ financially if he decides to stay at Parc des Princes rather than join either of Real Madrid or Liverpool. However, the winger asks for ‘sports guarantees’ to sign a new deal at PSG.

The economic situation of top European clubs has changed due to the Covid-19 pandemic, and this is a factor the Premier League winners ‘cannot neglect’ when it comes to signing Mbappé.

Sport have carried claims made in France and further talk about Los Blancos and the Merseyside club.

The Catalan newspaper states the interest from Real Madrid and Liverpool in Mbappé is ‘real’. Despite interest from the two sides, the Paris based club are hopeful their star will sign a new contract. 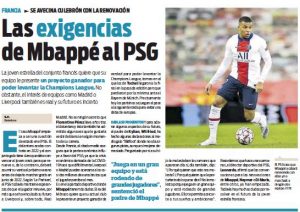 Mbappé has ‘more doubts’ about PSG’s sporting ambition, and wants them to present him a ‘truly winning project’ with an aim of winning the Champions League.

Liverpool will not be able to offer Mbappé a better financial package than PSG, but they can tempt him to join them by presenting a better sporting project.