Currently enjoying his vacations in Brazil, and probably enjoying Manchester United anf Liverpool rumours too, Anderson Talisca still doesn’t know where he will be playing next season.

The Benfica midfielder has given an interview to his home state outlet Correio da Bahia on Thursday, and as written in the story, he just bought a one-way ticket.

Talisca spent the last season at Turkish side Besiktas, who had a buying option over him. But as they couldn’t spend that much money (around €21m), Talisca was returned to Benfica, where he’s unlikely to play due to a fallout with the club in the past.

Asked by Correio where will he be playing in the next campaign, he doesn’t have an answer yet. Be if he had to choose, it would be the Premier League.

“England. For the fans, for being a theatre, a show, all games are a spectacle and I like it,” Talisca told Correio. 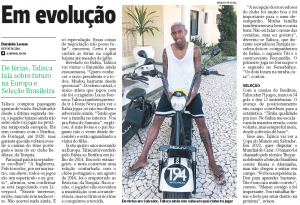 Correio mentioned the rumours linking him to Liverpool and Manchester United, but the player avoided confirming any kind of negotiations.

“The interest exists, it exists, but there is nothing certain. I haven’t agreed anything yet. It’s just speculation. These things of negotiations I can’t speak.”

The Portuguese press recently claimed that the player’s agent Carlos Leite is in England negotiating the sale of player, with Benfica hopeful of selling him for €40m. It seemed like an effort to sell Talisca, which Manchester United and Liverpool once again named.

Both clubs have been linked previously, along with Wolves, and Jose Mourinho is on record explaining how much he rates the Brazilian.