Inter Milan have abandoned a potential swap deal for Manchester City’s Joao Cancelo due to City’s asking price for the Portuguese defender.

Cancelo arrived at the Etihad in a big-money move from Juventus last summer but has endured a challenging first year at the club.

He has been linked with a move away this summer, and the biggest rumour was that he could find himself involved in a three-way swap deal between Manchester City, Inter Milan and Barcelona.

The latter are desperate to sign striker Lautaro Martinez, and it was believed that the clubs had proposed a deal that would see Barça swap Nelson Semedo and Cancelo in a deal and then include the Portuguese in their move for the Argentine.

Corriere Dello Sport confirm that such a proposal was being discussed at one point but has now become ‘bogged down’.

That is due to Manchester City’s valuation of Cancelo, who they put a €65m asking price on last summer when he arrived at the club as part of a swap deal taking Danilo to Juventus.

That means they couldn’t let him go for anything less than €50m this summer, a price that Inter Milan simply ‘don’t intend to consider’.

They ‘like the idea’ of bringing Cancelo back to the club after he spent a year there on loan in the 2017/18 season. 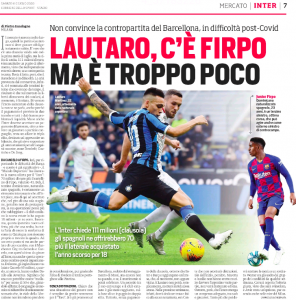 Thus, it now remains to be seen what will happen with the full-back after seemingly failing to convince Pep Guardiola this season.

It has looked extremely likely that he would be moved on, but that has changed in the last week or so, with it now seeming more likely he will stay and fight for his place.

City’s asking price may have something to do with that as few clubs could afford such a high price given the current economic climate.