Few in Scottish football had heard of Pedro Caixinha before the manager was linked with taking over at Rangers, and his Ibrox appointment shows thinking beyond the usual obvious candidates.

Rangers indentified Caixinha and then, as the manager has himself explianed, used former player Pedro Mendes to contact him. Now working as an agent in Portugal, Mendes spoke to Caixinha about Rangers and was able to learn the manager was genuinely interested in taking the position.

With Caixinha now securely in place, and having learned about the club, he’s got this summer to bring his own players in and change the way his team performs. That’s already starting, Rangers have wasted no time before signing recruits, and one of those, Daniel Candeias, has been speaking to Portuguese newspaper Record.

When asked about Caixinha in training and the style to expect, Candeias made it sound like there’s some good football on the way: “The first training sessions are going well. I was already used to the methods of the manager. These sessions are always very intense and with a ball, which is good. 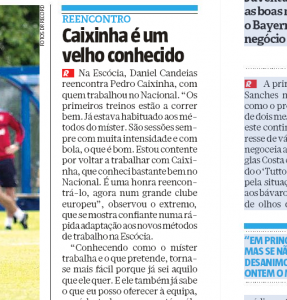 “I’m happy to go back to work with Caixinha, who I knew quite well at Nacional. It is an honour to meet him again, now in a major European club. Knowing how the coach works and what he wants, makes it easier because I already know what he wants. And he also knows what I can offer the team, which is to give everything on the pitch until the last second, for my teammates but also for him.”

A game more based with the ball and possession, attacking, and giving absolutely everything… Rangers fans will be expectant.