Double interviews with players are fun, but when it’s Benjamin Mendy and Riyad Mahrez, it turns into a degenerative mess, and we mean that in the best way possible.

Knowing each other for close to a decade, the Manchester City pair are like two peas in a pod, and their camaraderie oozes throughout the interview with Onze Mondial.

Discussing everything from the moment they first met each other (Mahrez was late for his first ever training session with Le Havre) to their time together at the Etihad, the duo also opened up about what it’s like to work under Pep Guardiola.

Mendy starts: “His intelligence! Mate, it’s crazy! His way of understanding football, to see it and his vision, it’s just incredible. It’s a pleasure to work with him. That’s why I kill myself for him every game, because I want to give back everything he teaches us on a daily basis.

Mahrez chimes in at this point, explaining that the most ‘shocking’ thing about the Spanish manager is how he ‘works like a madman’. 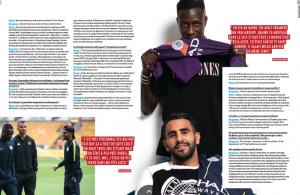 As the Algeria international points out: “Even when we win games 6-1 or 6-0, he tells us ‘We can do better, I saw the game yesterday, we can improve’. He works so much. I’ve had many coaches, and I’ve never had one who works so much. He works too much.”

That work ethic is the reason why everywhere he’s gone, Guardiola has been successful.

At this point, they both go in the description of the goal against Huddersfield, Agüero’s strike to go 1-0 up.

Guardiola had told them the Terriers were the only team to mark man to man when the ball comes out from a set piece.

After that, Mendy explains: “He told Aguero to stay up top. He explained to both wingers to go very wide and leave Kun in the middle, assuring him the defender would stay one on one with him. We all went wide, he asked the two number sixes to position themselves elsewhere. And what was meant to happen happened.