In last week’s issue of SportBild, there was a big article on Timo Werner and the striker’s future at RB Leipzig.

His contract runs out in June 2020, and therefore pressure is building and will continue to build unless a renewal is agreed. It was explained as a ‘poker’ situation.

When they were listing interested clubs, SportBild presented Manchester United and claimed the Red Devils have been watching Werner intensively. Chelsea, Atletico Madrid, Borussia Dortmund and Bayern Munich also got a mention, but it was pretty new for United.

We ignored it, waiting to see if they mentioned it again.

Well, sure enough, in this week’s magazine, SportBild list Manchester United as one of the clubs interested in the player. 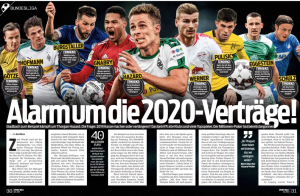 It’s explained RB Leipzig have been trying to get an extension signed for over a year and have offered to double the player’s salary to more than €6m a year. Werner is hesitating, and waiting for ‘concrete requests from top clubs’.

The 22 year old striker has scored eight goals for his club so far this season. His best Bundesliga campaign was 2016/17 when he scored 21 goals and provided five assists.

SportBild clearly believe a transfer is possible, with clubs likely to circle more if the contract stand-off continues.