It seems Adel Taarabt may have taken the right choice when pushing to stay at Benfica until the end of the season.

With the player reportedly not accepting the offers he had to leave, with Reading one of those linked, it was weird at first to see him wanting to remain at a club who signed him in 2015 and never gave him an appearance.

However, things are explained now, as who’s in charge of Benfica now is Bruno Lage, who used to be the manager of the B squad in the first part of the season.

So after proving himself to Bruno Lage for the B squad, Taarabt is ready to have his first chance at the club, as confirmed by the manager in a press conference this week. 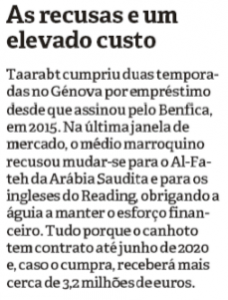 It’s Record who writes a story about it today, claiming Taarabt has lost eight kilos for the start of the season and has been working hard for this chance.

The newspaper insists that one of the clubs who wanted to sign him was Reading, along with Al-Fateh from Saudi Arabia.

But the player would have rejected both offers, forcing the Eagles to continue paying his big salary, which is agreed on a contract that runs until 2020.

Now if this offer from the Championship side ever existed, we’ll never know.