A couple of days ago, when Benfica were agreeing the last details for the signing of Grêmio star Everton Cebolinha, the Brazilian press said Premier League side Everton were still in the race for the winger.

It’s been claimed that Carlo Ancelotti personally called the player to talk about a move, however, the problem was the 24-year-old was convinced about moving to Portugal.

Perhaps it sounded like something from the Brazilian press to hurry up Benfica’s moves, but as the Portuguese media now reports an agreed deal, they insist on the information about this phone call.

Newspaper Record has a front page story today saying the Eagles are signing Everton in a €20m deal, giving Grêmio 15% of a future transfer. 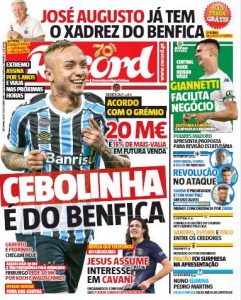 They say that during negotiations yesterday, Grêmio used the interest from the Premier League side to try to make Benfica raise their bid for the winger.

Record claims to have ‘confirmed’ by their own sources that Carlo Ancelotti called Everton Cebolinha to try to ‘seduce him’ and bring him to England.

Everton’s bid for the player was similar to Benfica’s, and that’s why the Brazilian club didn’t get involved in his choice. The winger and his staff thought he would have a better adaptation in Portugal, and that’s why he agreed to a five-year deal with the Lisbon side.