SportBild have a big feature on Jose Mourinho in their magazine this week, of course they do.

The manager’s perceived struggles at Manchester United is one of the biggest stories in the game right now and the combined pull of the club and Mourinho as a football celebrity means it’s bigger than it would otherwise be.

Some fans of the of the Premier League club believe it’s all to sell newspapers and get clicks, but SportBild’s audience won’t rush to buy the magazine for this, it’s not really a priority, more an amusing sideshow.

Anyway, after all the explanation of his trouble, strife, and everything going on around the Portuguese manager at Old Trafford, SportBild then claim, according to their own information, that Wolves both Nuno Espirito Santo is a candidate to replace the Manchester United manager.

To be absolutely clear, they state: ‘And so there are already rumours about the succession process. In addition to Zinedine Zidane is also a Portuguese compatriot of Mourinho on the list, according to SportBild info: Nuno Santo, coach of promoted Wolverhampton. Santo was once the goalkeeper of FC Porto, coached by Mourinho. With Jorge Mendes, Mourinho and Santo have the same advisor.’

Why would a German magazine know about a Portuguese Wolves manager being on the list of Manchester United? It’s hard to know, especially given the Mendes link. 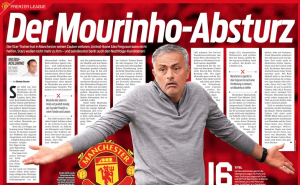 Gestifute are hardly going to push out stories about one of their managerial clients potentially taking over from another… are they? Probably not.

If anything, the Mendes connection could make this less likely, not more likely.