Everton outcast Sandro Ramirez looked set to get his big chance for Real Sociedad, with Willian Jose expected to be sidelined until the end of the month.

The Brazilian forward is the club’s senior striker and Sandro will either be playing a backup role, from the bench, or be pushed to the side.

Given he’s once again returned to Spain saying he’s all about goals, the chance to provide the ones missing from Willian Jose was not to be missed. On top of that, Adnan Januzaj is also out, La Real need a hero.

From an Everton perspective it also gave Sandro chance to kick off the loan in a good way and get some transfer value back.

But then Sandro left training injured twice in two days, and the reports after the second time didn’t sound too promising.

Now Marca report the striker has a sprain in his right knee so unless something dramatic happens, and he heals quicker than medical science predicts, he won’t play against former club Barcelona. 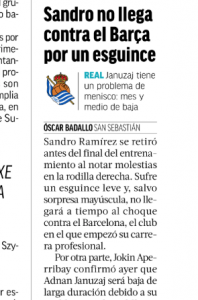 That would be better known here as a medial ligament.

There’s no prediction of a return date, and whilst the good news for Everton is it’s not thought to be long term at this stage, any knee ligament issue is of course bad news.