Unable to make Michy Batshuayi’s loan deal permanent after a second half of the season loan spell from Chelsea, Crystal Palace remain a striker short for the coming campaign.

Christian Benteke hasn’t exactly shown he can be relied upon of late, while questions remain about the abilities of Connor Wickham and Alexander Sørloth in England’s top tier.

That’s why it isn’t entirely crazy to see the Eagles being mentioned alongside names their fans will already know well, like Khouma Babacar.

Currently at Sassuolo in Serie A, the thrice capped Senegal international has been heavily linked to Crystal Palace in the past, but the opportunity to stay in Italy, where he has spent nearly all of his career, put an end to that transfer happening. 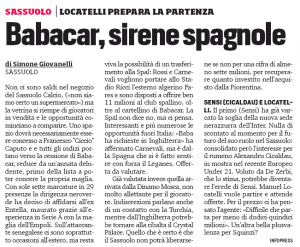 Used as a rotation option at Sassuolo, the 26-year-old started 16 of his 29 league appearances last season, scoring seven goals and assisting teammates twice.

With the expected arrival of Francesco Caputo, Corriere dello Sport believe a space will need to be made up front, and ‘all the clues point’ towards Babacar being sacrificed.

A transfer to SPAL is touted, but the club’s chairman Giovanni Carnevali admitted his striker ‘has requests from England’, and ‘indiscretions’ suggest Crystal Palace could return to try and sign the player they wanted a year ago.

What is certain, as the Italian newspaper puts it, is the price, and it would take ‘at least €7m’ to free Babacar from his Sassuolo contract.

Hardly expensive for a player these days, is it?

Newcastle offer for striker ‘will have to be very tempting’ –...