Leeds United have been linked with Bologna’s Filip Helander several times this summer, with claims in the Italian media the Serie A side could offload him before the window closes.

The Swede struggled with injury last season, and there are indications in Italy he won’t be a starter for Bologna next season.

Bologna have been busy in the transfer marker this summer, and recently they signed Frenchman Sebastian De Maio, and Costa Rican Giancarlo González. It’s expected the two players will be Roberto Donadoni’s central partnership next season, which is a view shared by Gazzetta dello Sport, Corriere delo Sport and Tuttosport.

After the arrivals of De Maio and González, Donadoni now has five central defenders as his disposal, and Helander could be the one sacrificed according to reports over the weekend.

With the World Cup next year, the Sweden international will need to play regular football, and Leeds United could offer him more opportunities. Pontus Jansson has 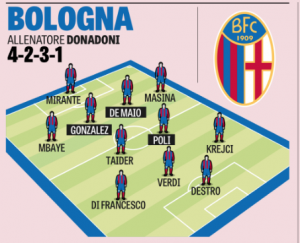 benefited with the Swedish national team since his arrival at Elland Road due to playing on a regular basis, and Helander could do likewise.

It’s been claimed the Championship side are showing ‘insistence’ to sign the 24 year old this summer, and the message Helander is getting from the Italian media is pretty clear.

When Leeds United claims first appeared, Helander explained he wanted to play for Bologna, but given the country’s three major sport newspapers see him out of the team, the Swede not included in one of their predicted teams, his hopes don’t look great.